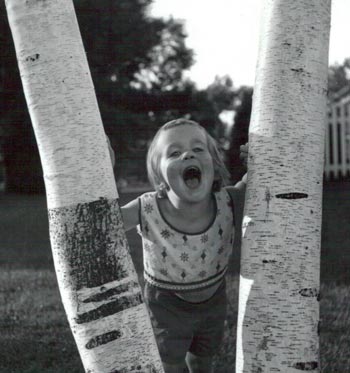 I grew up in a family of eight kids — four girls and four boys. I’m number six, the youngest daughter.
We lived in a neighborhood filled with big families. My street was only a half-mile long, but about 130 kids lived there. Our street was bordered by fields and woods, and we played outside all seasons. We played Capture the Flag, Ditch It, Kick the Can and lots of sports: baseball, football, basketball and hockey.

In the summer, we belonged to a swim club that was a half-mile away. I could ride my bike there and spend the whole day at the pool. I liked my swim club so much, I named the school in Cesar Takes a Break after it (Pinebrook Elementary). 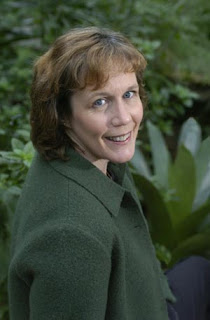 Now, I am married and have three kids, two cats, one anole lizard and a parakeet. I work as a newspaper copy editor, writing headlines and editing articles. I like working with the news. It’s interesting to learn about what’s happening in my town, in the country and throughout the world. But I like making up own stories, too. That’s why I wrote Cesar’s story. I have lots of other ideas for children’s stories that I am working on.

Here are a few other favorite things:

Favorite books: When I was a child, we went to the library every few weeks and loaded up on books. My favorite book was The Cat in the Hat, by Dr. Seuss. I really wanted that cat to visit my house. I read about a million Nancy Drew mysteries. And I loved Harriet the Spy, by Louise Fitzhugh — that book inspired me to keep a journal for the first time. In sixth grade, I was fascinated by The Diamond in the Window, by Jane Langton.

Favorite things to do: Climb a sand dune (even better — run down the sand dune). Hear a good joke. See the northern lights. Stay home for a movie night with my family. Like Cesar, I love to go on vacation, explore new places and meet new people. But I also love going back home to the people and places I love.

Favorite friends: I won’t list my favorite friends because I’m too afraid I’ll leave someone out. But growing up, I was lucky to have many friends who lived on my street. Here are the girls I played with when I was little: Liz, two Dianes, Sissy, two Lisas, Joan, Kathy, Eptisam, Nada, Carolyn and Sharon. The boys I played with were: Tom, Perry, and two Rays.

The only good thing about saying goodbye is that it gives us a chance to say hello again. So, goodbye for now. Come back and say hello soon!